What is a DIE CLASH?

A die clash occurs when opposing dies collide with each other when a planchet is not in the striking chamber resulting in a partial overlay design.

LIMITED MINTAGE OF ONLY 10 PIECES and will include the following: 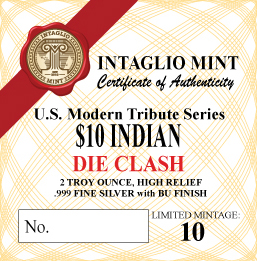 About the $10 Indian Tribute:

Another of the iconic designs in American coinage, the $10 Indian, is rendered as a compliment to the original design in this 2 ounce, 39mm diameter, Domed Die Silver Art Medal.

The Indian Head eagle was a $10 gold piece or eagle struck by the United States Mint continuously from 1907 until 1916, and then irregularly until 1933. The obverse and reverse were designed by sculptor Augustus Saint-Gaudens, originally commissioned for use on other denominations.  He was suffering from cancer at the time and did not survive to see the coins released.

Though called the “Indian Head Gold Eagle”, the obverse design is not actually that of an American Indian but of Lady Liberty facing to the left wearing an Indian headdress or feather war bonnet with “LIBERTY” inscribed on the headband of the bonnet.  Above the bust design are 13 stars to represent the original states or colonies.

The reverse features a standing eagle on a perch of bundled arrows and an olive branch. To the right of the Eagle’s head are the words “E PLURIBUS UNUM” and next to the eagle’s breast is the motto “IN GOD WE TRUST”  On the outer periphery are the words “UNITED STATES OF AMERICA” and metal weight “TWO TROY OUNCES.”