What is a MULE?

In numismatics, a mule is a coin or medal minted with obverse and reverse designs not normally seen on the same piece. These can be intentional or produced by error.  The earliest mules are found among ancient Greek and Roman coins.

LIMITED MINTAGE OF ONLY 100 PIECES

Born in Dublin, Ireland on March 1, 1848, Augustus Saint-Gaudens’s influence over American sculpture was considerable.  During his apprenticeships, he attended both Cooper Union and the National Academy of Design, studying drawing.  In 1867 he left for Europe where he studied in both Paris and Rome before returning to the U.S.

Saint-Gaudens took great interest in the “art of the coin”:  his $20 gold piece, the double eagle coin he designed for the U.S. Mint, though it was adapted for minting was first struck in 1907, in ultra-high relief (only 20 minted).  The coin took up to eleven strikes to bring up the detail.  The ultra-high relief did not strike properly and was deemed impractical for commerce.  The design was then flattened and a high-relief version was minted.  Even though it took eight strikes less, it was still considered impractical for commerce.  The coin was finally modified to a normal-relief version, which was minted from 1907-1933.  It is still considered to be one of the most beautiful American coins ever issued.

About the Peace Dollar:Designed by Anthony De Francisci, the Peace Dollar was first produced in December of 1921.  The initial production followed a large mintage of Morgans that were struck earlier in the year.  The initial design of the Peace Dollar was high relief, which created numerous problems with the dies that included greatly shortened die life, and in some instances shattered dies when attempting to bring up all the details in a single strike.   The idea for the piece was attributed to Farran Zerbe, a former ANA President, and a promoter of numismatics in the early part of the 20th century. 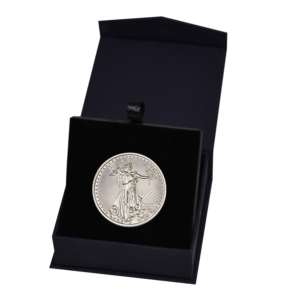 $20 Saint-Gaudens Obverse: Lady Liberty holding a torch in one hand and an olive branch in the other, stepping forward, with an array of rays behind, and a depiction of the US Capital Building to the lower left and a surround of stars and the word “LIBERTY” across the top.

Peace Dollar Reverse: The reverse shows an eagle perched on a rock, with a laurel branch, and with PEACE inscribed below. UNITED STATES OF AMERICA and EPLURIBUS UNUM are above, while TWO TROY OZ. is to be seen just below the center. Rays of an unseen sun emanate from the lower right.